BOB JACKSON VULCAN 60cm c-top. During 2015 I decided to build what will probably be the last new bike I will need or want using Record 9sp group 1998/99, the last all silver-alloy equipment before the mass inclusion of carbon fibre bits. I spent months looking at various names, labels plus attempting to justify any purchase and came to the conclusion that a Vulcan frame would be the one. Fancy lugs, any chrome plating and a large choice of paint finishes, panels, bands including the barbers pole seat tube as I might have wished for 50 years ago. I forwarded BJ a set of Campa dropouts from my stock which they were happy to use and the frame was delivered April 2016. I still have my 1969 TT bike which was built by BJ but bears another shop name, I consider that served me well so why not another, plus I don’t have blind faith in a label ending in a vowel.
Record 9sp group – it’s silver, Cinelli Grammo stem – quite scarce, TopErgo 66-42 bars – I like the shape less deep than ‘old’ 66, Cavaliere saddle – because it’s Cinelli and blue, Ambrosio Excellence rims 32/36 – a relatively shallow silver rim, Veloflex tyres – have amber walls, Ciussi Inox bottle cage, Silca pump – I had one the correct length. I have no compunction using Shimano pedals, I like their shoes with the raised sole so you can walk in them rather than waddle and have them on three bikes using one pr shoes. Chainrings are 39/48 the latter being C-Record 48-AS so chaintrap pin is in correct place, anything over 50t is no use to me today just pottering around the lanes 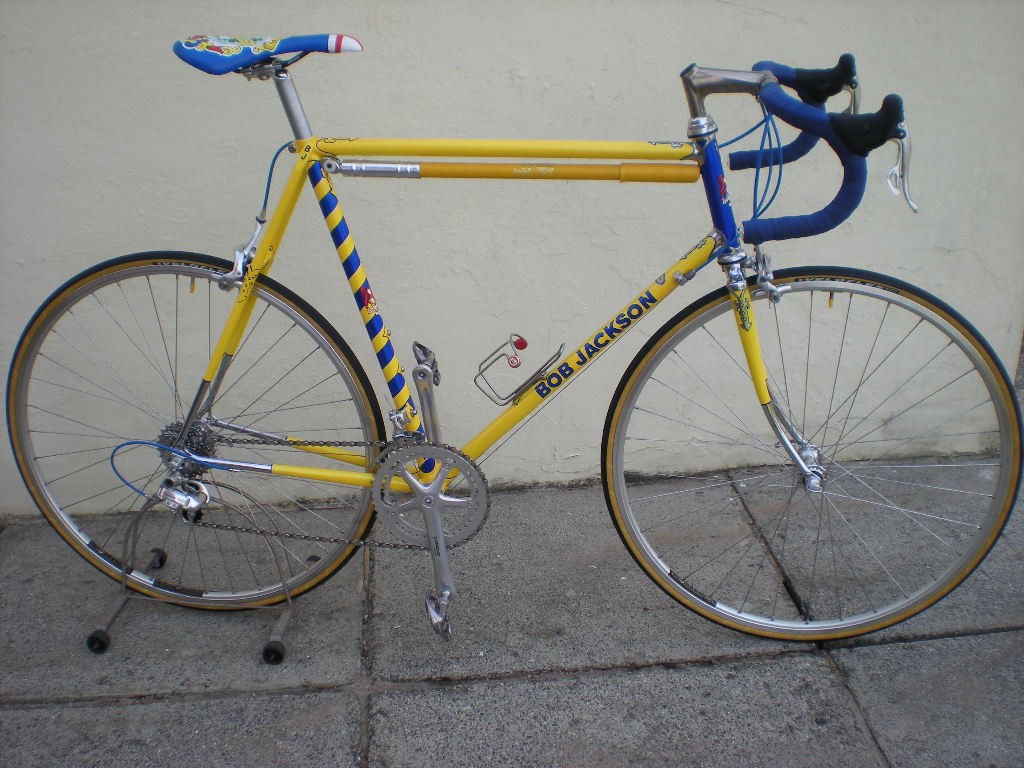 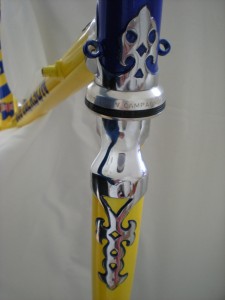 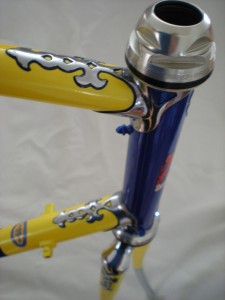 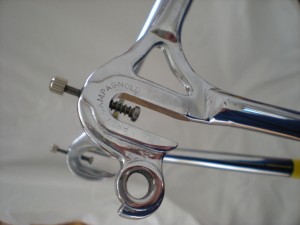 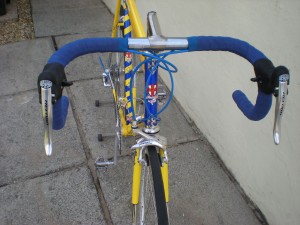 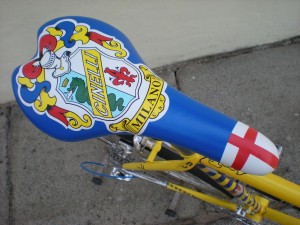 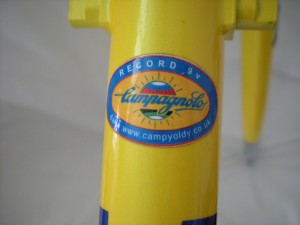 ROSSIN FRAME OF COLUMBUS MAX TUBING FITTED OUT WITH CAMPAGNOLO 50th ANNIVERSARY GROUP BUT…LOOK AT THE BRAKE LEVERS! They have the engraved handles & gold emblem of the Cinquantenario gruppo but have been modified for aero cable route. I bought the cycle from Rossin around 2008 when I had my lock-up shop. It has never been ridden, the seatpost position appears ridiculous but it has been inserted no lower than the Limit line.  Campa 7sp freewheel, Electa saddle, Biodinamica bottle, ITM bars & stem, Wolber rims. The gruppo has a high number, MAX tubing was late 1980s? and the levers mod. must have been a Campa factory job as the little rollers are mounted on a tiny spindle around which the handles have been pressed. All very unusual.   <SOLD> 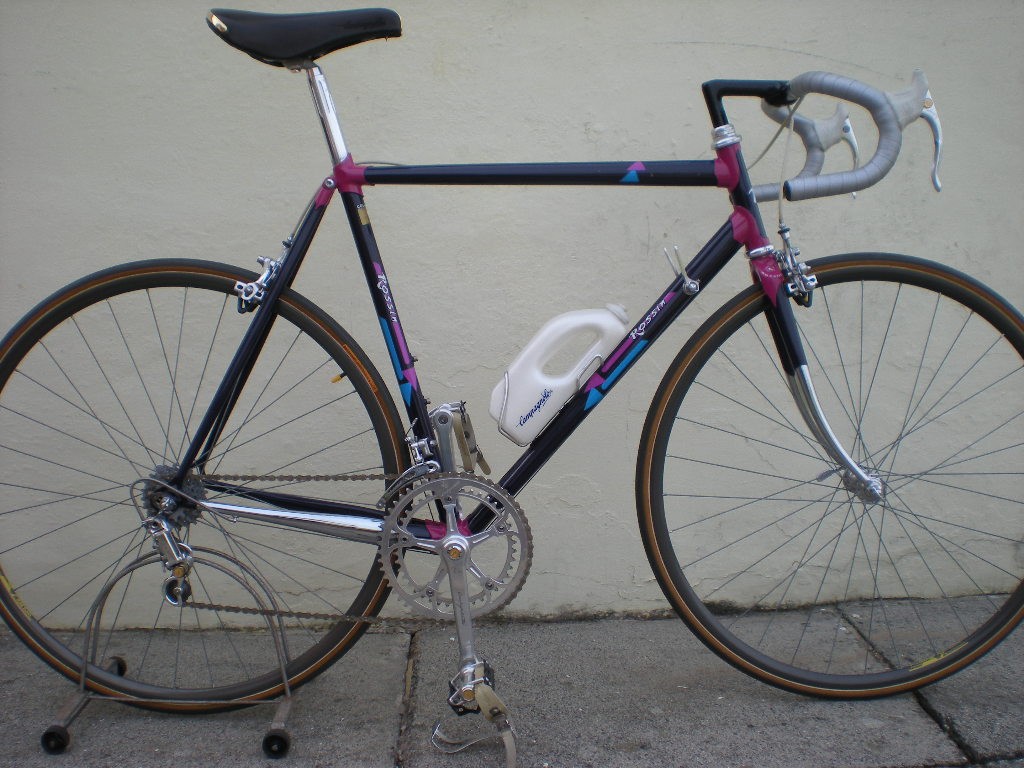 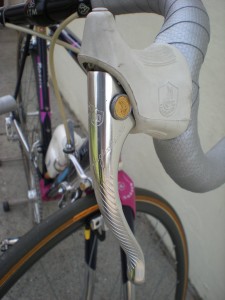 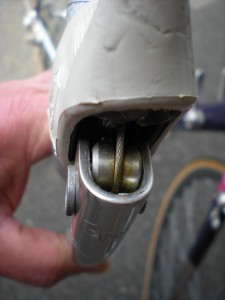 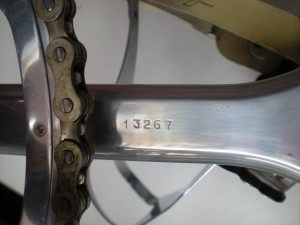 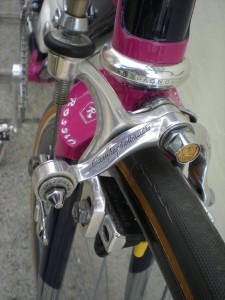 P&A KENISTONS of ROMFORD model GIRO, EARLY 1960s. I saw a pic and road test of one of these in the ‘Comic’ (CYCLING) dated July 18th 1964 written by Roger St.Pierre. Having then just left school and owning a mere sports bike, the write-up of this one left a lasting impression. It lasted until around 2009 when I acquired a Giro frame, had it re-finished at Bob Jackson in Leeds and built it up with period components. I have not attempted to use identical parts to the road test bike, I had a set of Mafac Racers NOS as opposed to Universal c/pulls on the test bike. The other parts may well be what  one might have really wanted but probably could not afford most of fifty years ago-which is of course the main motive behind the current retro movement.  I have ridden it about 3 miles to test the brakes & gears. The chance of me riding a L’Eroica type event now is slim.               Price £2300.00

CAMPAGNOLO RECORD REAR MECH AND FRONT MECH BOTH NOS with outer casing stop and the die-cast arms, not alloy, that suspend the chain cage

CAMPAGNOLO TWIN BOLT SEATPOST #1045  AND BROOKS B17 SADDLE. These two items can only be assembled with each other, the saddle having parallel rails for maximum fore and aft adjustment and requires the Campa post with narrow rail clamps. The saddle appears to have been ‘butchered’ as the vogue with the excess leather trimmed off flush with the curved frame at back and around the nose. The extra large copper rivets have been peined over in a rather amateur fashion underneath

TA CHROMED STEEL BOTTLE CAGE with ORIGINAL NEVER USED MILK RACE BOTTLE 1962 BOTH
NOS. I deliberated for hours over whether to have brazed on bottle cage bosses fitted as clips could  scratch the paint but decided against as old photos show they did not appear until a little later

TA STEM MOUNTED CABLE GUIDE NOS, never a common or popular accessory which is why I fitted it 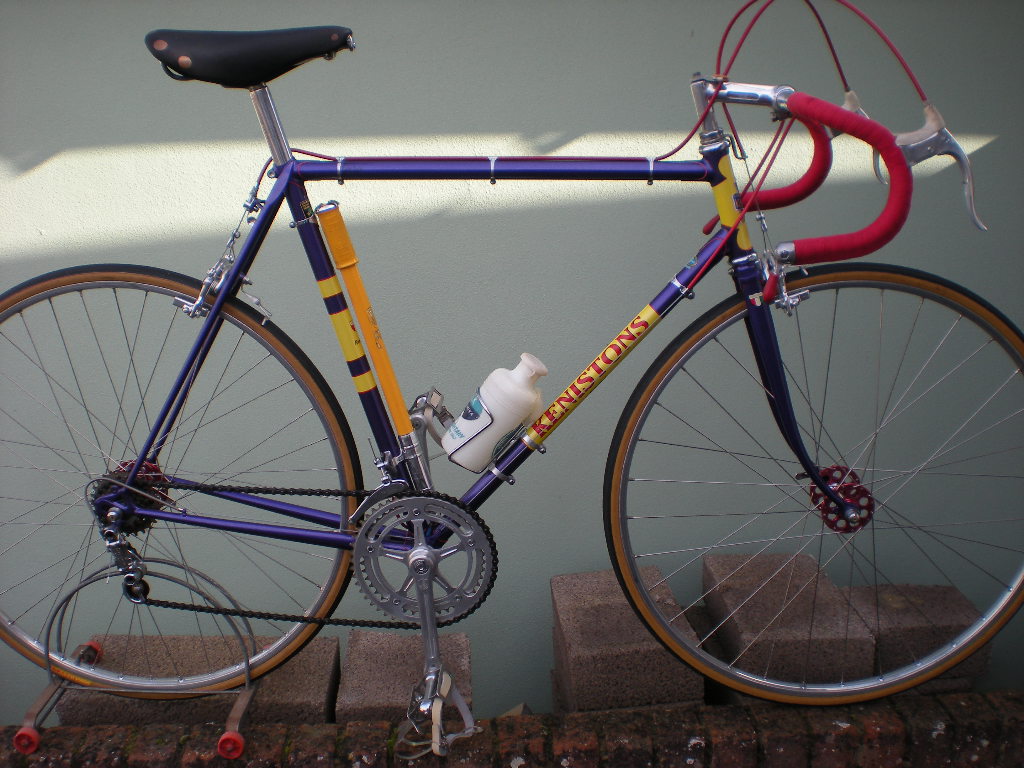 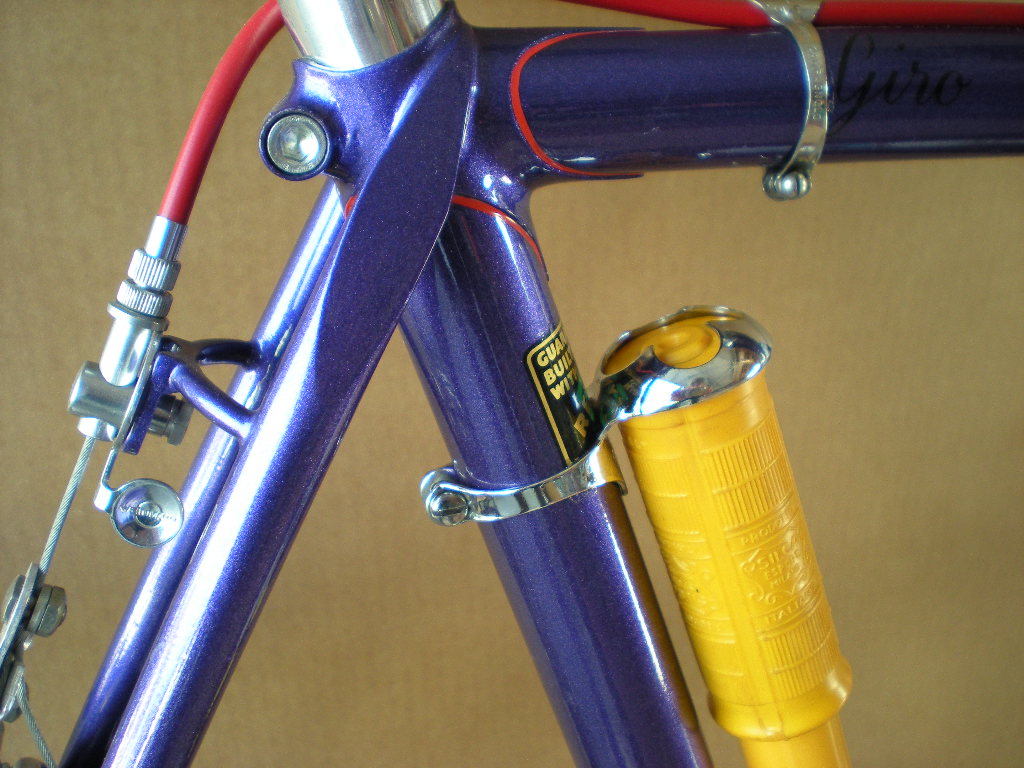 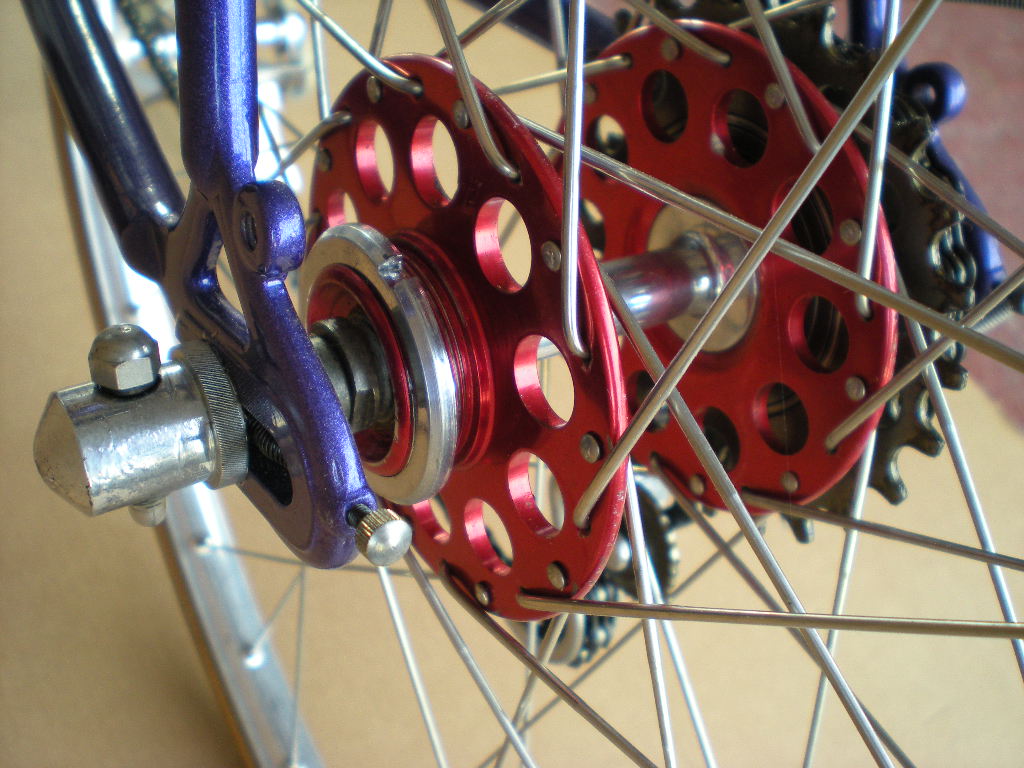 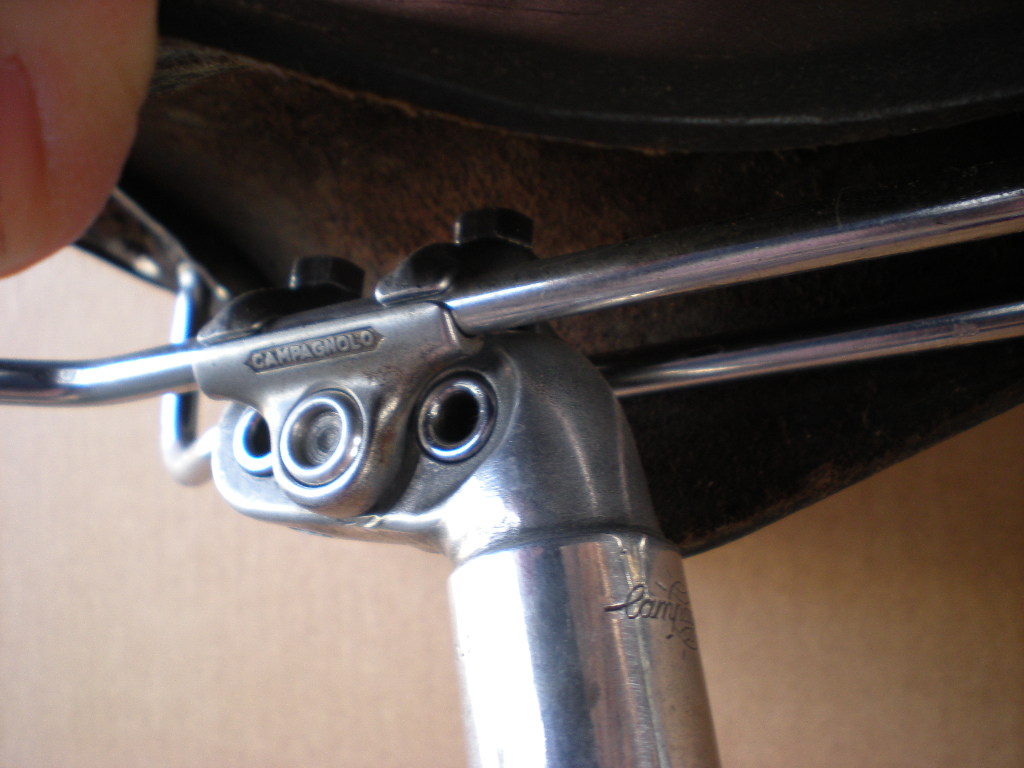 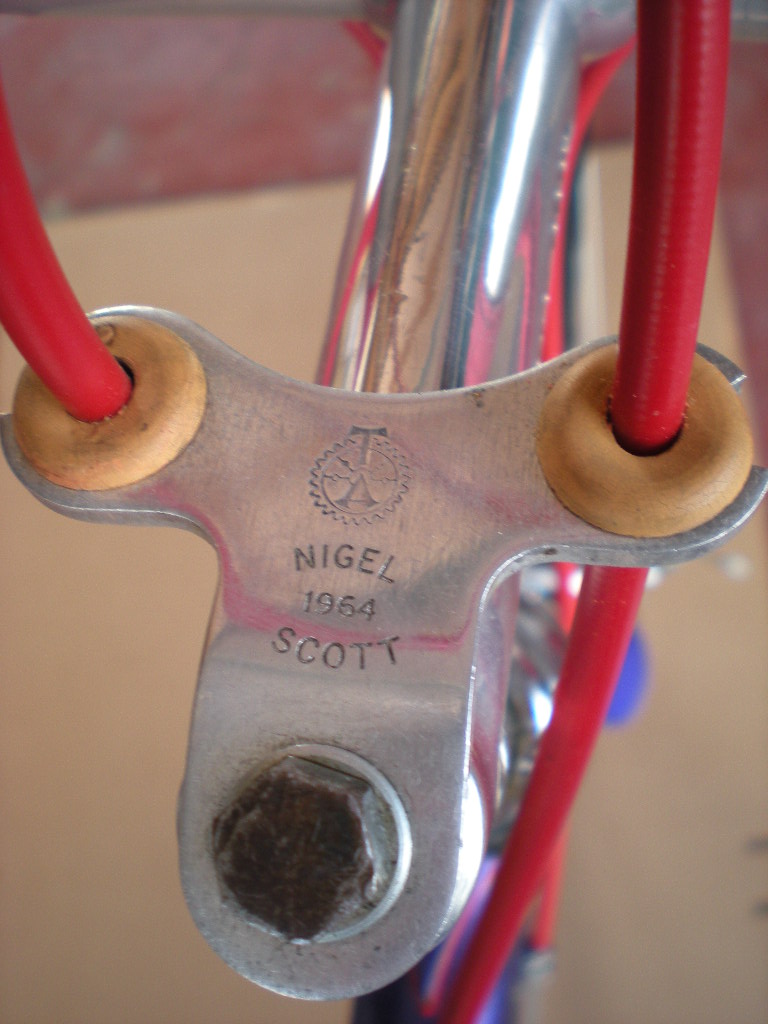 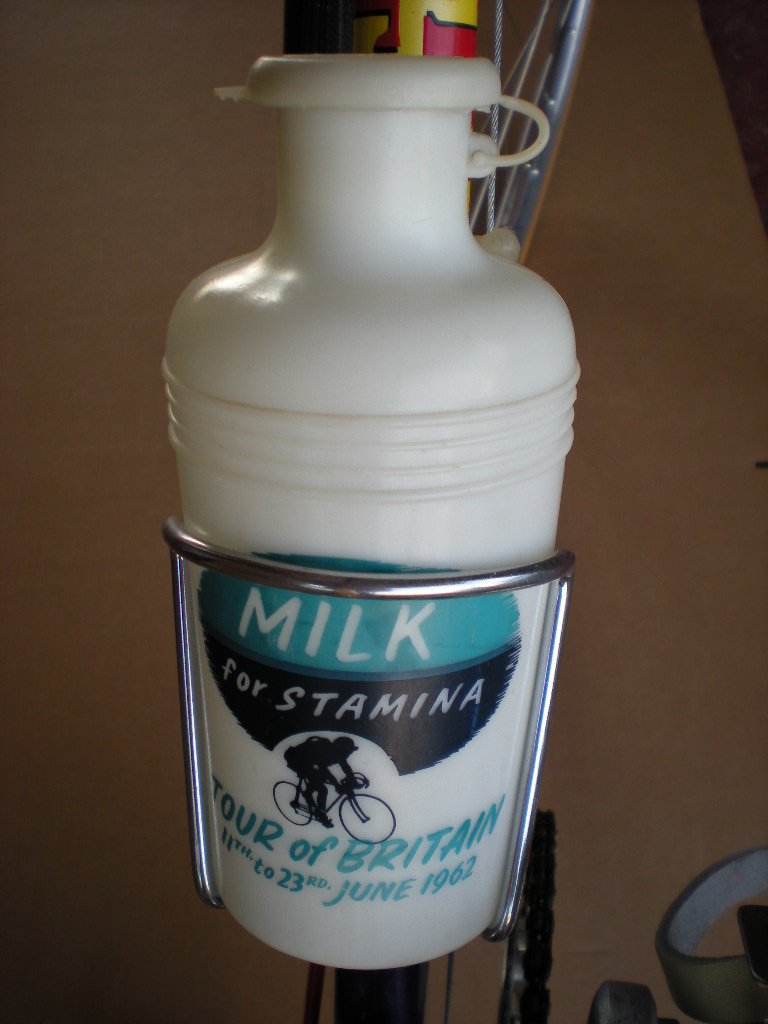 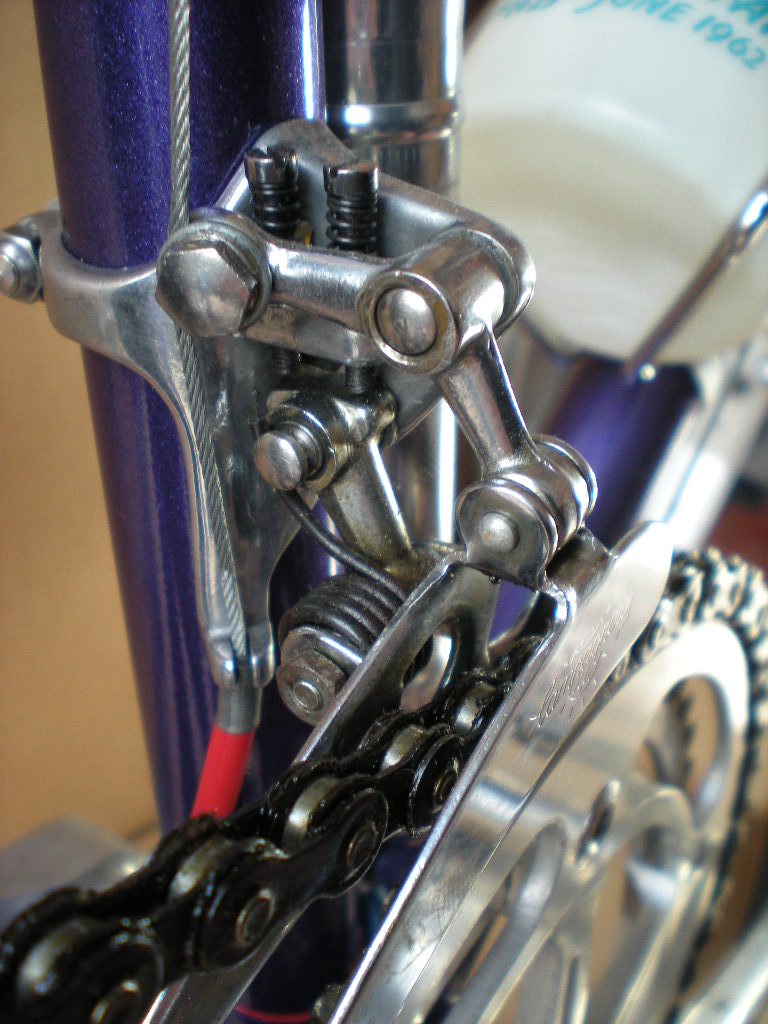 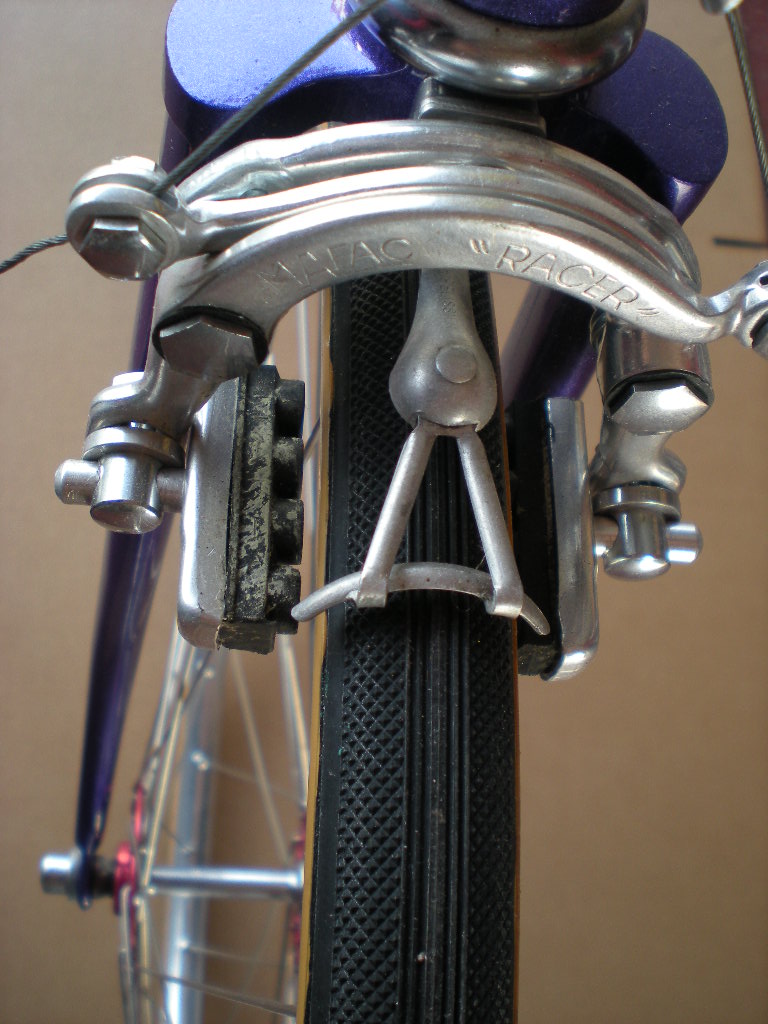 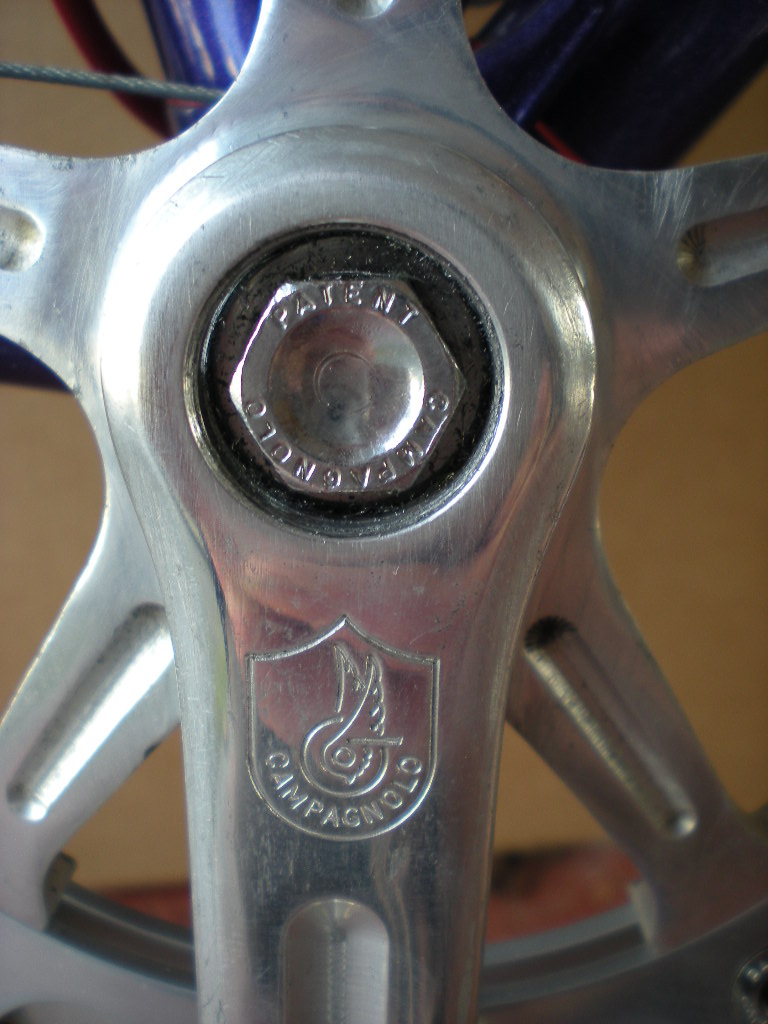 GRAMAGLIA PISTA~Nuovo Record chainset 151bcd, pedals, large flange hubs, seatpost, headset, Cinelli steel bars & stem. Balilla toeclips.  Shown as found.  The seller said that Gramaglia had a workshop in Baggio, Milan and had built frames for TONI MASPES, BEPPE OGNE SANTE and GAIARDONI. This is a lovely bike of its type. The chrome is not perfect-its used and presumably has seen some fierce competition, perhaps at the Vigorelli?   <SOLD> 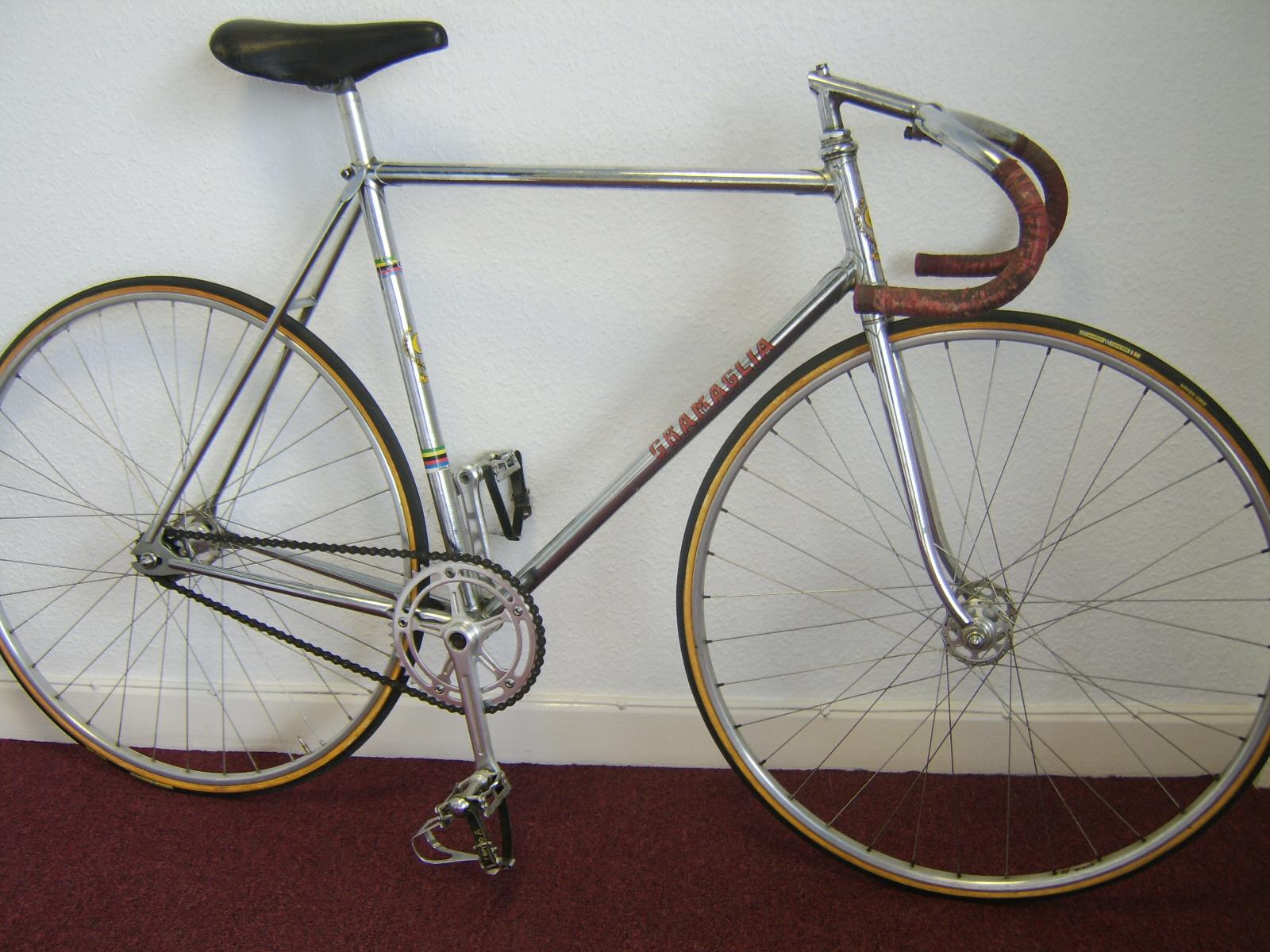 I have been given the following information on Gramaglia by one of my Milanese friends.  Shop address was v.Forze Armate 401, Zona Baggio, Milano and he also owned, apparently, Cicli Auro.  His ‘stock’ colour as they seem to have, was green-as Gios blue, Bianchi celeste etc. Gramaglia started around 1940 and ceased trading on 31st December 1975, he died during 2002. No chance of finding any decals! 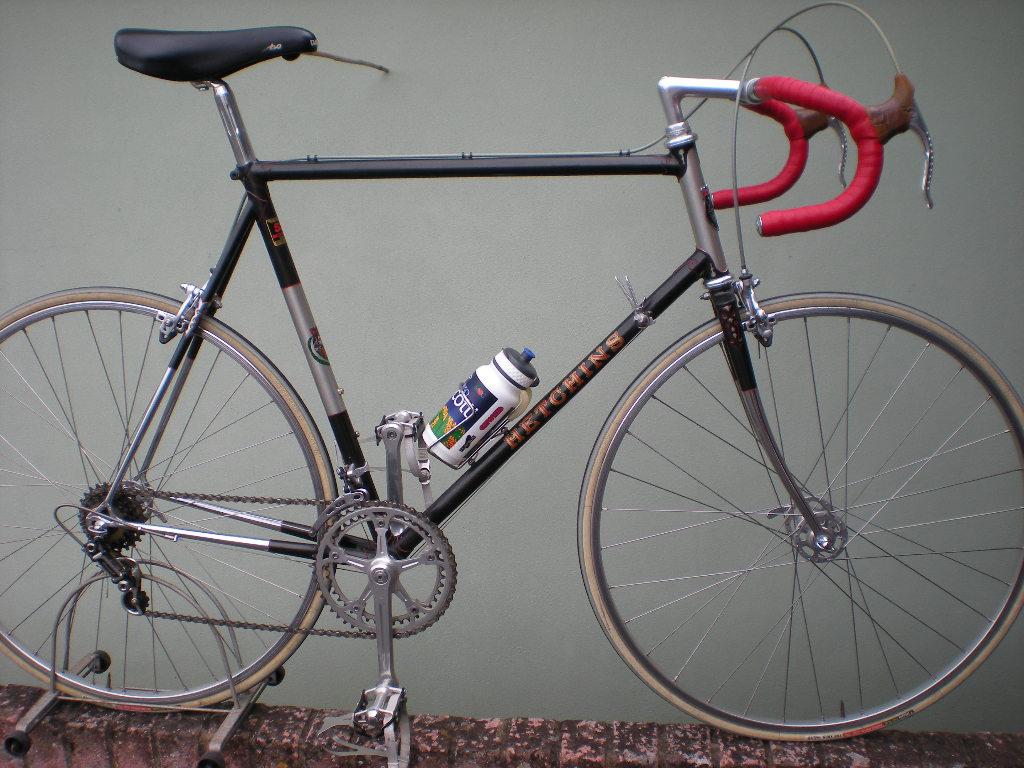 IF YOU ARE OF A NERVOUS DISPOSITION OR EASILY OFFENDED, DO NOT SCROLL DOWN FURTHER!! 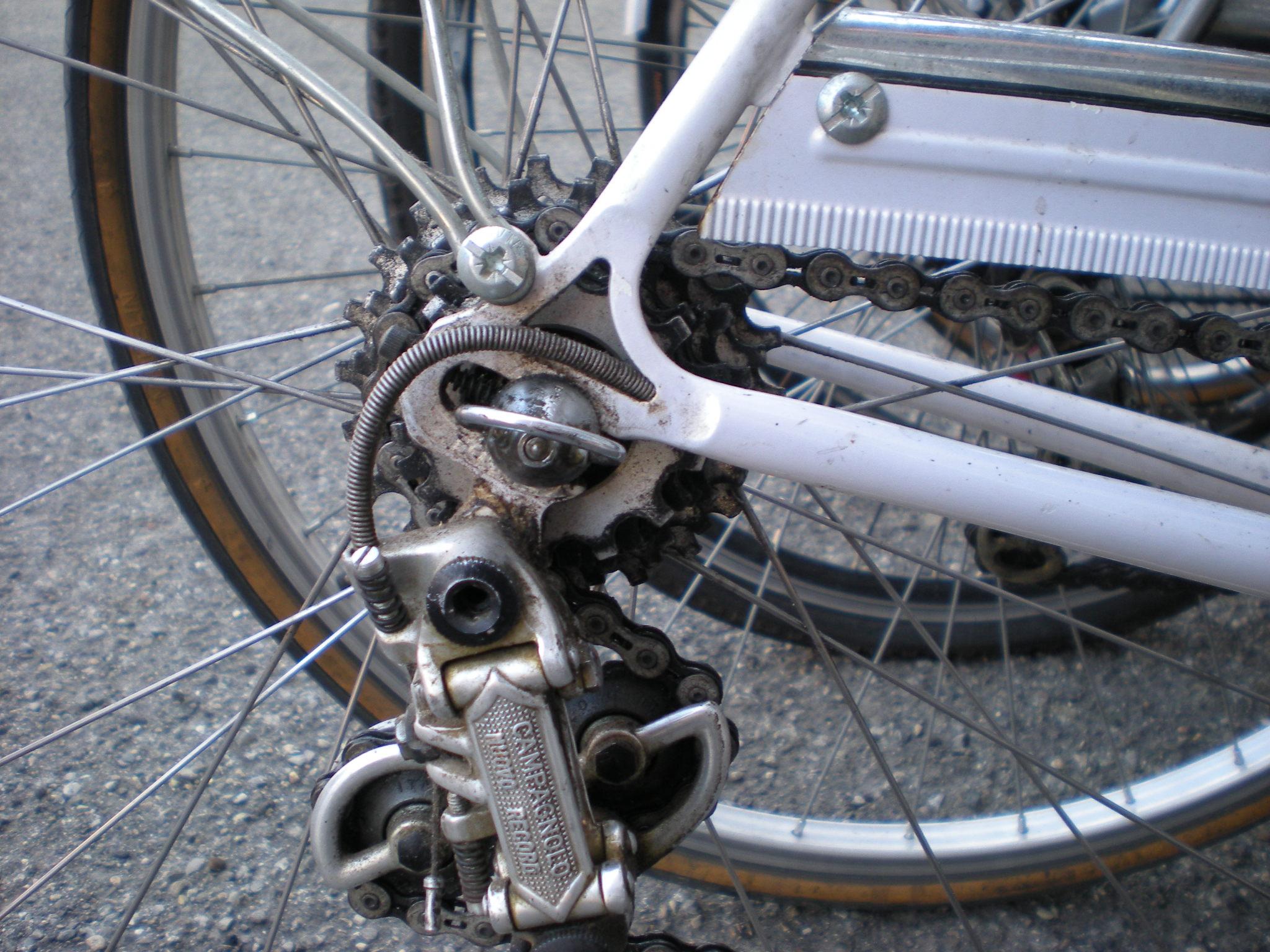 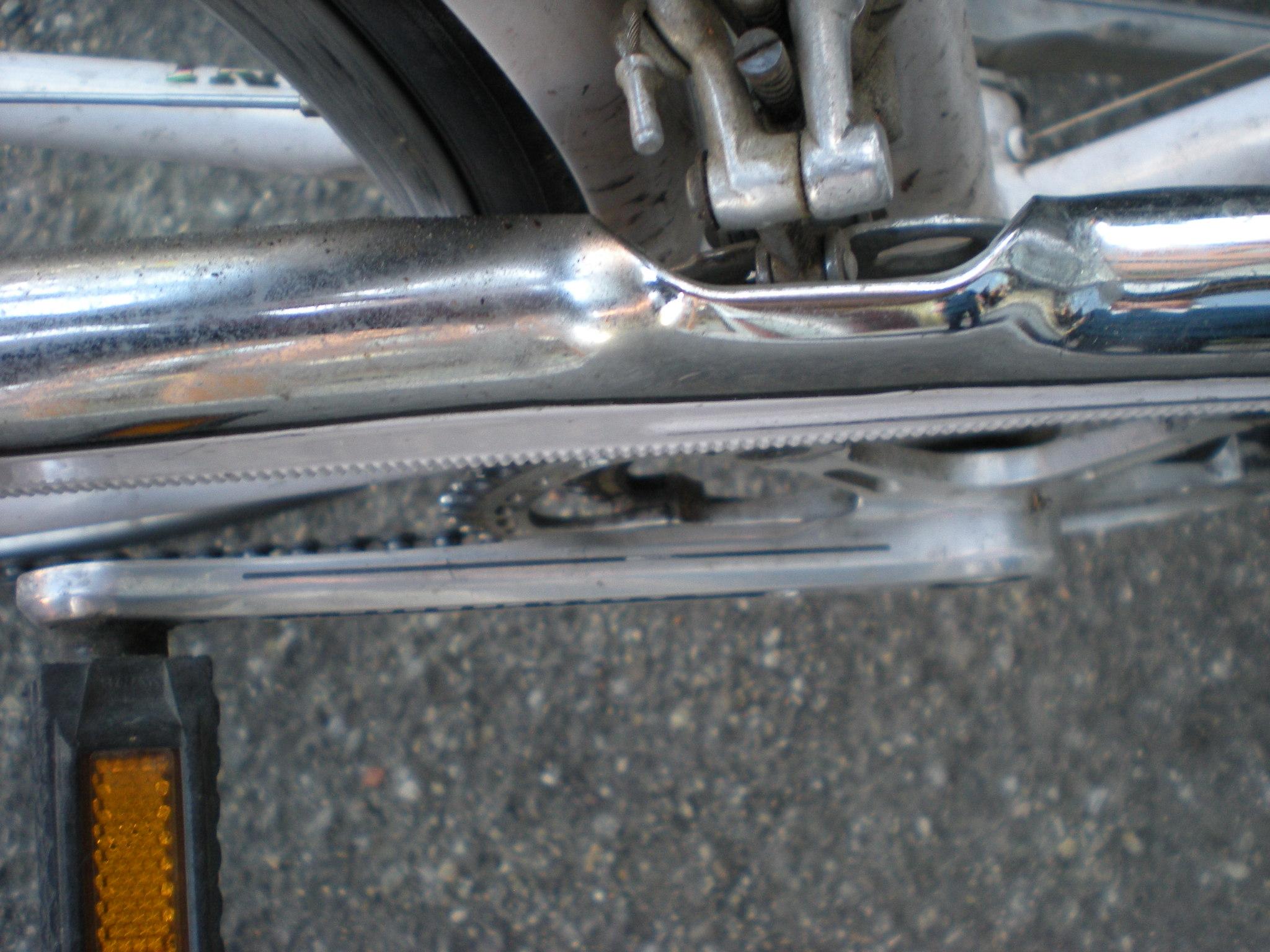 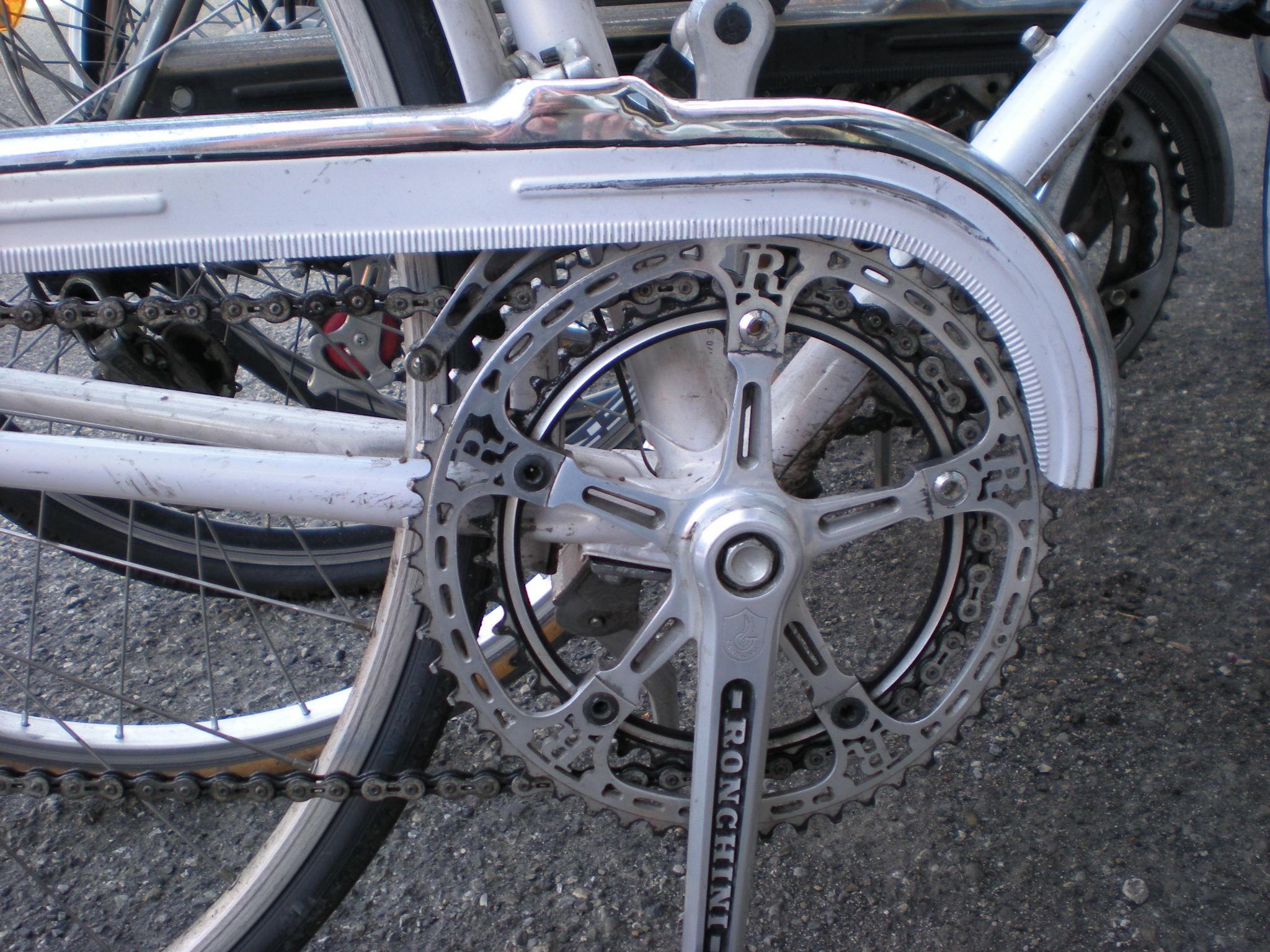 I SPOTTED THIS BIKE OUTSIDE A SHOP and it exemplifies the difference between how we would value a classic road bike and this owner who used it basically to save walking around his town. You can see from these three pics that it was originally a decent bike with the panto parts, internal cables, slotted Everest chain and NR calipers with flat qr levers. The bars had been changed to flat/city and this chainguard fitted. The back of the crank had been machined off to provide additional clearance and a tag brazed to the seatstay instead of fitting a clip. The chainguard had been carefully worked to clear the front mech

I also saw a shabby Colnago with the remains of a 50th Anniversary group on it. I think I was so shocked by its’ appearance I wasn’t quick enough with the camera 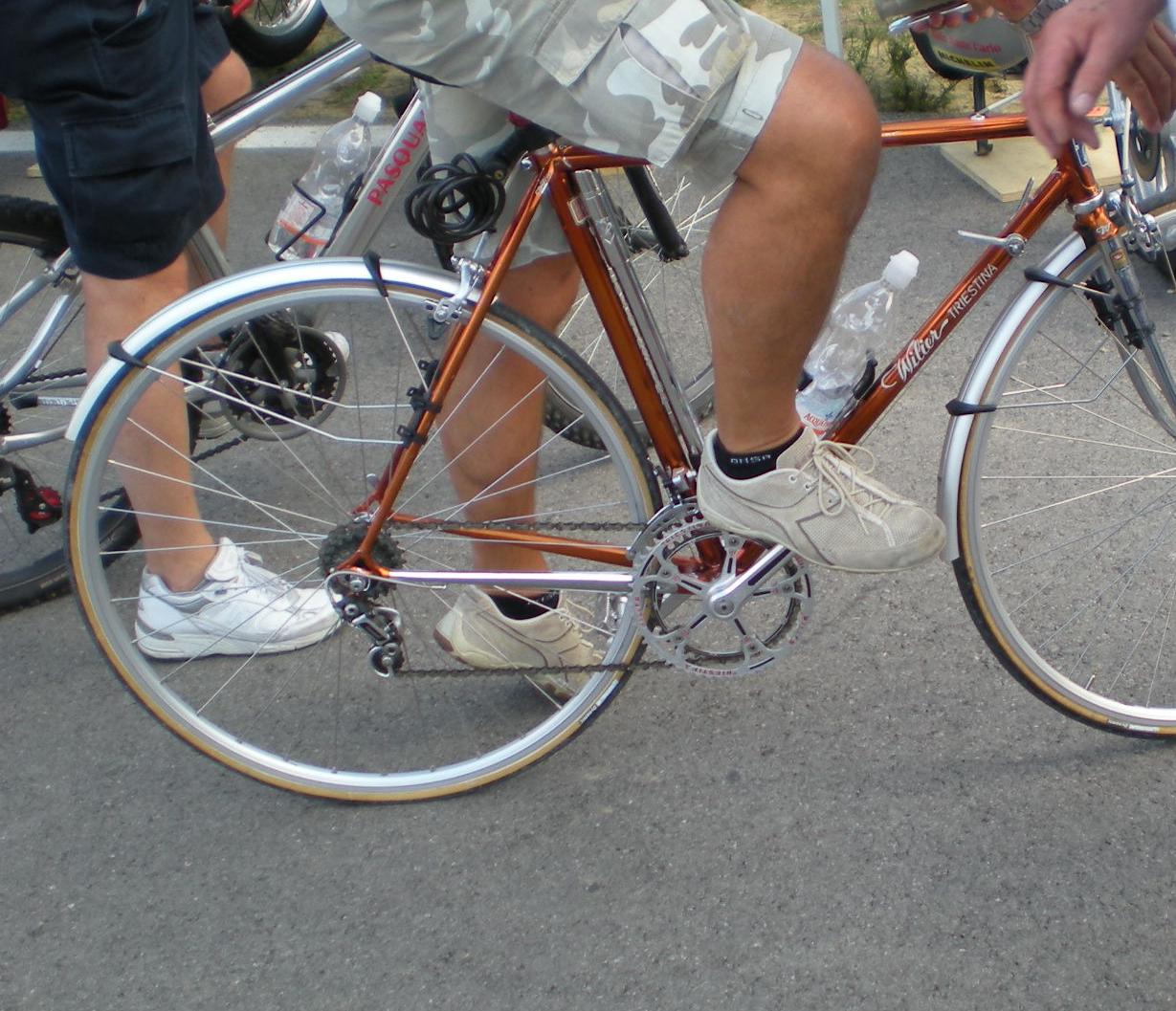 A Colnago Mexico with the indented tubes, and remains of  Super Record group-even the freewheel is Campa.  The head of the right crank has been slightly modified by tapering/rounding off. It happened to arrive in a workshop for two new tubs whilst I was there and I almost surreptitiously took the pics hence they aren’t that sharp, but if they were better, you would only weep more 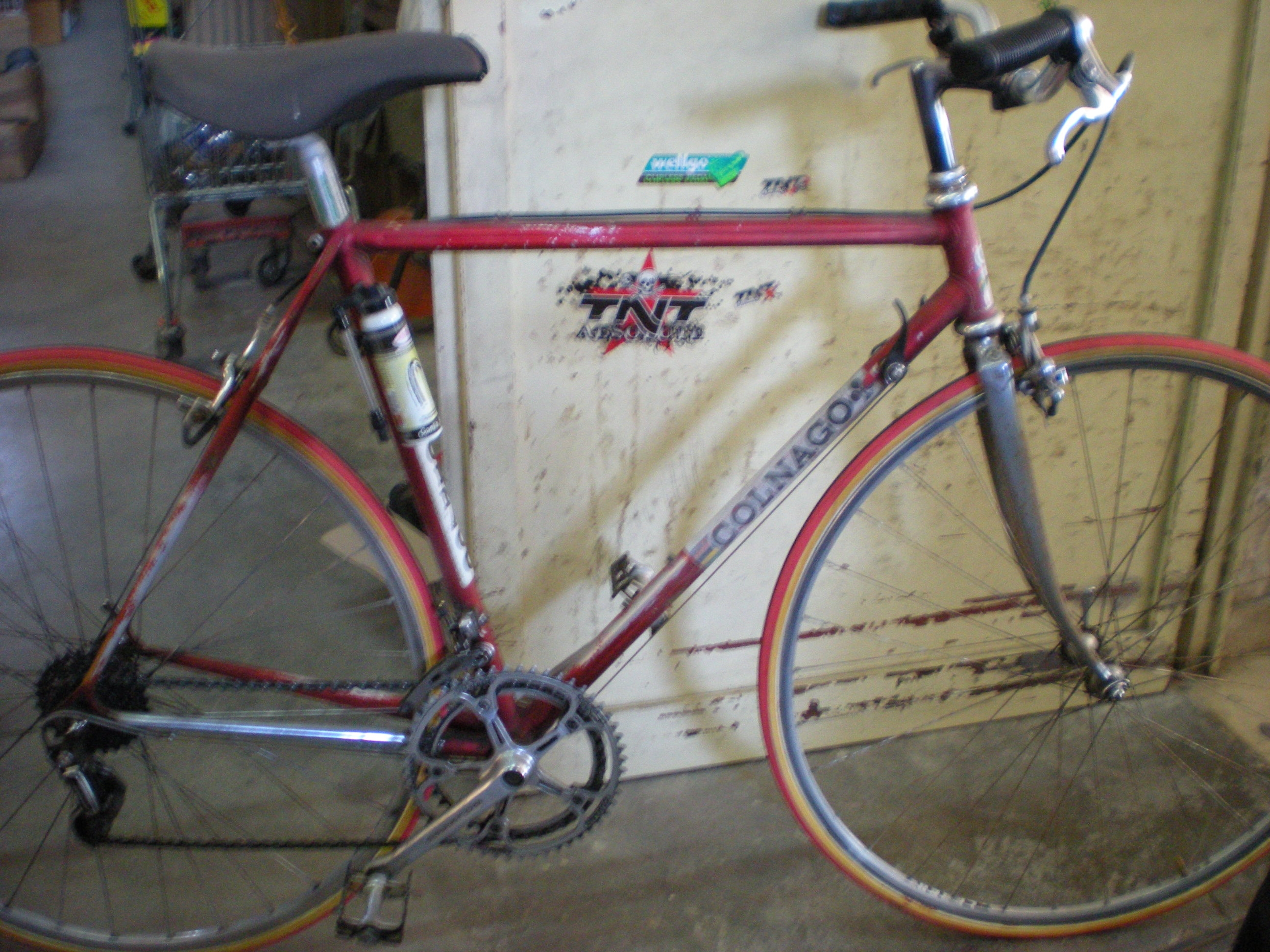 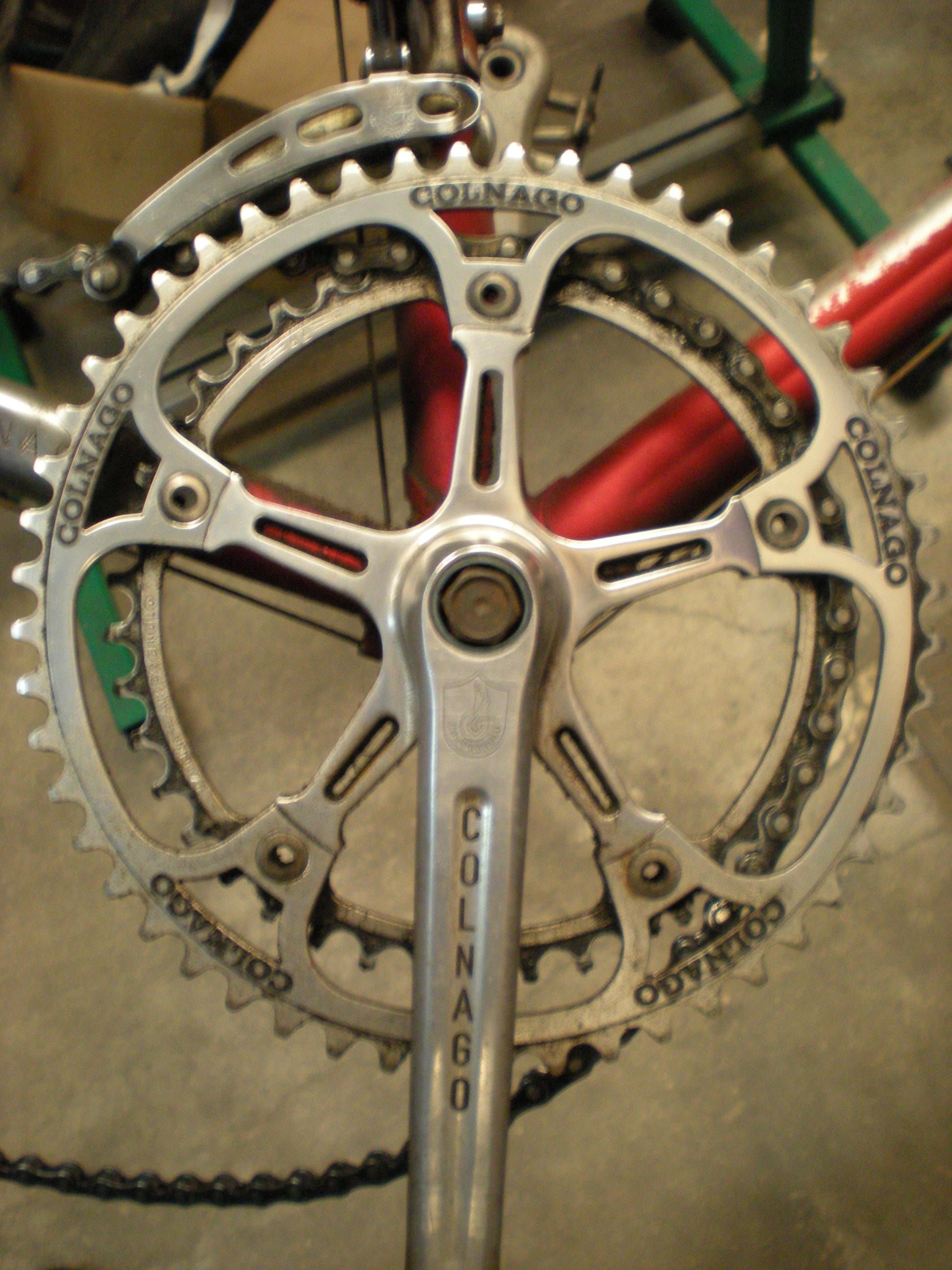